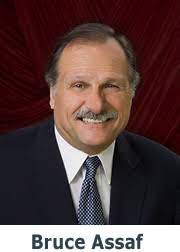 Bruce Assaf has been called a missionary-at-large. With years of missionary endeavors in former communist-oppressed and war-torn countries, God has given Bruce a battery of experiences that have given him wonderful insights into current world events. He has been used of the Lord, speaking into the lives of political and religious leaders, along with ministering to the broken and downcast. God has clearly and unmistakably given Bruce a true prophetic anointing to the Church. Like Esther of old, he has not remained silent in delivering an uncompromising gospel message “for such a time as this.” (Esther 4:14).

Bruce is the author of ‘Charting Your Course to Win God’s Way and ‘If My People.” His most recent book released on September 11, 2007 is “Behind the Veil of Radical Islam: The Coming War”. Being from a Middle East background, combined with his missionary experiences throughout the world, He brings both clarity and focus to the war on terrorism, radical Islam and what it means in light of end -time Bible prophecy…connecting all the dots!

It’s Beginnings… Blow the Trumpet International had its beginnings in the early fall of 1989. As the walls of communism collapsed in the former Soviet Union, the Berlin Wall crumbled and the Revolution took place in the country of Romania. Just prior to seeing these history making world events, the founder of Blow the Trumpet was in literally months of intensive prayer seeking God’s will for His ongoing plan & purpose.

As Bruce watched a generation of communism take its last breath, he understood what the Lord had been been placing on his heart. In what could be called a ‘vision’, Bruce saw literally thousands upon thousands of people…”an ocean of humanity” as he has described it, crying out for freedom. With a greater intensity of prayer he sensed the Lord was telling him, ” the liberty and freedom these people are crying out for is found only in Me.”

The vision to work and minister in these former communist-oppressed countries, in particular the country of Romania, was confirmed as the answer impressed upon his was revealed from God’s Word. It was found in the book of Joel…”Multitudes, multitudes in the Valley of Decision! For the day of the Lord is near in the Valley of Decision…”Joel 3:34. The confirmation and the physical evidence of the drastic change of those world events became a reality and confirmation to Bruce’s heart that he was hearing from the Lord , and this no doubt would be God’s plan & purpose.

For 13 years Bruce ministered as a missionary/evangelist serving the Body of Christ through assisting orphans, Bible distribution and Christian leadership and educational materials for churches and schools, several church plants, the co-founding of Logos Bible College in Bia Mare, Romania, and as the last part of the work (vision) God had called him to do, was to facilitate in helping to fulfill the vision of Christian television in Romania extending to other countries in Eastern Europe.

It’s Present… The Islamic Jihad that reached the shores of America on September 11, 2001, is but a foretaste of the gathering storm now brewing in the Middle East that will once again affect America, and the world. Terrorism is the leading weapon that will make the way to what was prophesied 2,600 years ago. As these events are rapidly and alarmingly converging, they will ultimately gather the nations of the world into a dreadful and final climax of war. In these perilous times we find ourselves living in, an day of uncertainty, unrest chaos and violence the ongoing purpose of Blow the Trumpet is to bring to the Church, and the world for that matter, both clarity and focus to these events that will ultimately affect every life on earth!